AUDITION: Love, Sex, and the IRS 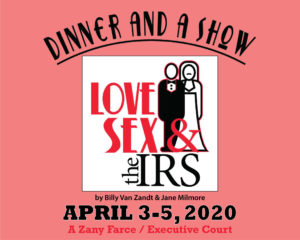 Presented by The Majestic Productions (Adults 20+)

Performance Dates: April 3-5, 2020 at Executive Court Banquet Facility. Please note that although this is a dinner theatre actors are NOT expected to participate in the serving or execution of the meal portion of the event.

Two young unemployed musicians, Jon and Leslie, who room together in New York City, try to save money by filling out their tax returns as a married couple. A visit from a lonely IRS auditor, one young man’s girlfriend, the other young man’s mother and a suspicious landlord, all at once, throw the two guys into a cross-dressing frenzy of cover-ups, half lies, outright lies, and even some home truths. It’s like a cross between I Love Lucy and Some Like It Hot!  A bedroom farce on steroids

Jon Trachtman (male, 20s – 30s): Jon is a musician and appears to be a smart, savvy guy.  He is engaged to Kate and best friends and roommates with Leslie. He’s the type who’s always trying to work an angle, even though he never quite succeeds. So naturally when his plan to cheat the IRS by claiming he and Leslie are married causes Floyd Spinner, the IRS agent, to investigate, he plans for Leslie to dress up to prove that he really is a woman. He also tends to have tunnel vision, which has caused Kate to feel ignored and has led to her having an affair with Leslie.

Leslie Arthur (male, 20s – 30s): Leslie is also a musician in the band with Jon. He is a charming and intelligent, (though rather nervous), guy who is quite popular with the ladies, who can’t resist trying to mother him. He’s also afraid of confrontation and is definitely led around by Jon. He is having an affair with Jon’s fiancée, Kate, while being in a relationship with the bubbly Connie. The actor playing this part will need to be comfortable being in women’s clothing because Leslie is dressed up as a woman for over half the show.

Kate Dennis (female, 20s – 30s): Kate is Jon’s fiancée, even though she is having a passionate affair with his roommate Leslie. Kate is a smart and aggressive young woman who expresses her opinions openly, but still needs to feel wanted and desired.

Mr. Jansen (male, 30s-60s): Mr. Jansen is the extremely nosey landlord in Jon and Leslie’s building. He is a cranky, sometimes bitter man who is “do as I say, not as I do” type of person. He has a strict policy of not having unmarried couples live in his building and is very suspicious that Jon and Leslie are living with their girlfriends in the apartment.

Floyd Spinner (male, 30s-60s): Mr. Spinner is the IRS agent charged with investigating Jon and Leslie’s suspicious tax returns. He comes across as a straight-laced no-nonsense man at first glance, but as the play goes on, he is revealed to be someone who is more than a little fumbling and desperate for somebody to like him. This is a great comic part and will require an actor who can play serious and stoic one moment and absolutely insane the next.

Vivian Trachtman (female, 40-60): Vivian is Jon’s extremely conservative and straight-laced mother; a country club type though, rather than a prim bluenose. She decides to stop in for a visit when she learns that Jon is engaged (though she doesn’t know to whom), and naturally shows up on the day he’s being investigated by Mr. Spinner. Vivian is horrified at what she thinks is going on in the apartment, i.e. Jon and Leslie living together without the benefits of matrimony.  The actress will need to be able to play stoic at one moment, out of control the next, as she gets drunk.

Connie (female, 20s – 30s): Connie is Leslie’s girlfriend although he is attempting to break up with her as the show begins. Connie is bubbly and emotional and something of a typical air-headed blonde.  She talks fast and essentially without breathing. Connie is devoted to Leslie and will do anything for him, as she ends up proving at the end of the play. This actress will need to be high energy, comfortable with physical comedy, and have great stage presence. Connie is extremely gullible and not very bright, but there is something sweet and vulnerable that also needs to be expressed.

Arnold Grunion (male, 30-70): An intense man in a trench coat found by Vivian on the subway and apparently a “fixer”, who can arrange for whatever is needed (including a sudden marriage), for a price. This is a shady, shifty character whose origins and intentions are a mystery.